This past month and a half, I binged all of One Tree Hill and I have a lot of thoughts

This past year, I started running a 2000s/pop culture blog on Instagram (follow me here) and have since been inducted into an elite group of 2000s obsessed queens. Even being as pop-culture-obsessed as I am, I never watched One Tree Hill. (I know, I know settle down)

Being a sitcom person, there has been a limited amount of drama/teen shows that I have watched. But as soon as one of my best friends convinced me to watch, I became obsessed.

The show follows estranged brothers Lucas and Nathan Scott who become teammates on their high school basketball team. In seasons to come, the two become closer even though they have been separated most of their lives. 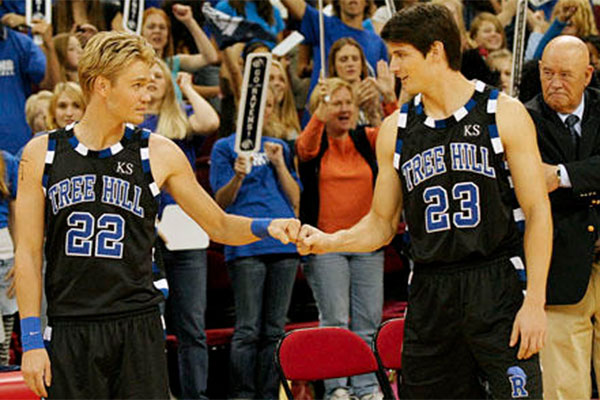 One of the main themes throughout the show I was fully here for was the Feminist aspect. Brooke Davis- a cheerleader, Peyton Sawyer- an alternative rock chic who doesn’t feel she belongs in the cheerleader crowd, and Haley James- “tutor girl” an intelligent student with a huge heart. These three become tight-knit, despite all of the classic troupes that would say that this dynamic wouldn’t work. Throughout the show, you witness fights between the girls but they also come on top in the end. More strong female characters are introduced later and are just as amazing as the original three.

OTH also shows healthy relationships and the downfall of bad ones. Naley – Nathan, and Haley are THE best example of a healthy couple. The two definitely go through hard times but always find more love for each other in the end.

Many people find solace in the show. There are so many life lessons to learn and the show brings a comforting aspect. Lots of the characters go through lots of hardships but the audience sees how they deal with when things don’t go their way vs. the traditional tv way of making everything sunshine and rainbows.

One of my friends, Sydney, loves this show for this reason.

“one tree hill not only brought me closer to my sisters the past year, but it taught me that I am not alone in what I go through. it made me feel like I was going to be okay. this show means so much to me and it always will.” (her ig and twitter)

To end here, I asked my bestest best friend/soul sister/lover/future roomie, Nicole (who made me watch the show in the first place and she will watch B99 for me) to round out the end of this piece. This is her ultimate favorite show and she got me on 2000s insta in the first place (her ig and twitter). love you, Zoe

“ONE TREE HILL IS SO MUCH MORE THAN JUST A TV SHOW TO ME. IT HAS TAUGHT ME SOME OF THE MOST VALUABLE LESSONS LIFE HAS TO OFFER, AND I CAN HONESTLY SAY I TOOK MORE AWAY FROM 9 SEASONS OF ONE TREE HILL THAN I DID FROM 4 YEARS OF HIGH SCHOOL. NATHAN AND HALEY TAUGHT ME THAT TRUE LOVE EXISTS, BROOKE DAVIS TAUGHT ME HOW TO FIGHT FOR MY FAIRYTALE, LUCAS SCOTT SHOWED ME IT’S NEVER TOO LATE TO LEARN FROM OUR MISTAKES, AND PEYTON SAWYER TAUGHT ME THAT “EVERY SONG ENDS, BUT THAT’S NO REASON NOT TO ENJOY THE MUSIC.” KAREN ROE WASN’T KIDDING WHEN SHE SAID TREE HILL IS THE ONE PLACE WHERE EVERYTHING’S BETTER AND EVERYTHING’S SAFE, BECAUSE THAT’S EXACTLY HOW I FEEL WHEN I REWATCH AN EPISODE. I HAVE NO IDEA WHO I’D BE WITHOUT ONE TREE HILL, BECAUSE THIS SHOW HAS CHANGED MY LIFE FOREVER. NOT ONLY DID THE SHOW ITSELF CHANGE WHO I AM AS A PERSON, BUT IT ALSO OPENED MY EYES TO SOME OF THE MOST TALENTED ARTISTS OF THE EARLY 2000S. ONE TREE HILL HAS ONE OF THE BEST SOUNDTRACKS EVER, HANDS DOWN. WHAT I PERSONALLY THINK IS SO AMAZING, IS HOW LINKED MY LIFE’S SOUNDTRACK IS TO THE CHARACTERS OF ONE TREE HILL. I HEAR “MORE THAN ANYONE” BY GAVIN DEGRAW ON MY CD PLAYER AT HOME, AND NOT ONLY DOES IT FEEL AS IF I ATTENDED NATHAN AND HALEY’S WEDDING MYSELF, BUT IT ALSO FLOODS ME WITH MEMORIES OF WATCHING THIS SHOW FOR THE FIRST TIME AT SUCH A CRUCIAL TURNING POINT IN MY LIFE. THESE SONGS ARE NOT ONLY THE SOUNDTRACK TO MY LIFE, AND THE CHARACTERS LIVES, BUT ALSO TO OTHER PEOPLE’S LIVES ALL OVER THE WORLD.”